It took me a while, but I finally managed to take photos of the Grinder after changes I decided to make. 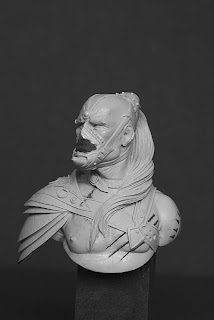 First of all, I made his 'muzzle' whole again. In my opinion this way he looks even more dangerous and wild.
I didn't want to paint any tatoos, but still flat surfaces of his arm and chest are begging for some 'attractions' so I decided to try scars and scarifications.
Mainly because even beeing big fan of tattoos and piercing, I find all forms of scarifications extremely hmmm... well, sick. Don't ask me why, I simply think that cutting out parts of your skin to create various patterns is simply wrong. So I guess it suits my wicked warrior - The Grinder:)

I'm going to paint him kinda like an aztec/mayan warrior, that's why I went for sun like scarification on his shoulder. And maybe I'll ad something more on his neck. For a while I was playing with various shapes around his right nipple, but I couldn't find anything that doesn't look cheesy.
On the left side of his chest, partly hidden under strap and knife, is normal scar after a fight with some wild animal. 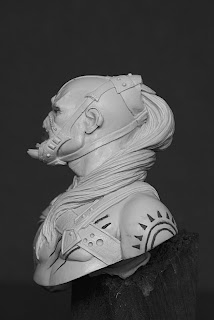 I was considering some scars/scarifications on his head, but I guess all the leather straps will be enough to make this part of the mini interesting. Especially with this feather like thingy that goes on the top of his ponytail.

Little Devil in a nappy - review

Next mini under a 'microscope' - Hell baby from Maow miniatures.
Review posted on Chest of Colors website for a change:)